From Biochemistry to Brewing

“Brewing beer is an art and a science,” says Chris Walowski of Trustworthy Brewing Co. “The art is making a product that people enjoy and the science is making that product taste the same exact way every time.” With his background in biochemistry and over ten years of experience in the brewing industry, Chris knows what he’s talking about. From big dreams and studying biochemistry at CSULB, to crafting cult-favorites as the Head Brewer of Trustworthy Brewing Co., Chris shares his unique experience how he became the brewmaster he is today. 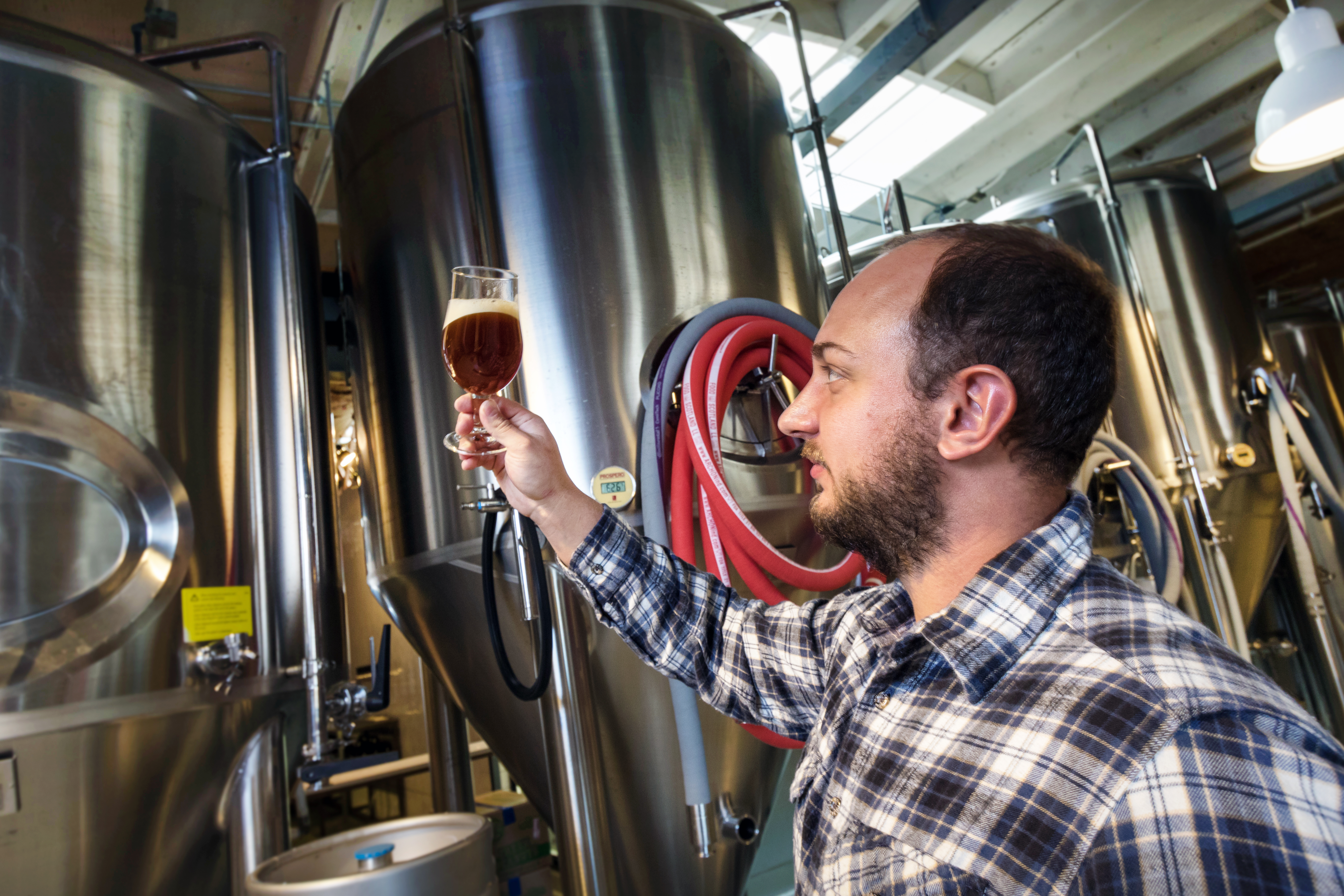 How did you get into brewing beer and when did you decide to fully pursue it as a career?

During college, I had a part-time job at Trader Joes and was introduced to new styles and flavors of beer than just the Bud, Miller or Coors. I began to start exploring new beer styles and quickly learned that finding craft beer was very difficult. I saw a show on TV about home brewing and there happened to be a home-brew store very near to my parent’s house. The TV show made it seem very easy since there was a store so close by, it was convenient and since it was really hard finding fresh craft beer, I decided to take matters into my own hands. I began brewing at home during my undergraduate degree at CSULB. It slowly turned into a fun hobby and then to a passion. I started brewing multiple times a week and winning awards at local competitions. I then started grad school and my accolades drew some attention. I was approached by a startup brewery in LA to help out and brew some beer. I, of course, said yes and quickly transitioned to head brewer and was working part-time. I finished my MS and was offered a full-time salaried position at a new brewery. I took the job and began my brewing career.

“Being able to understand the fermentation pathways and how biochemical pathways produce off flavors allows me to troubleshoot issues much more efficiently.”

How has your background in biochemistry given you an edge in your career? Can you give a few examples?

Having a background in science and biochemistry has given me a very definitive edge in my career. “Brewing” beer is a bit of a misnomer in my opinion. The yeast makes the beer! I am merely a steward. My job is to make sure the yeast is happy and comfortable and that fermentation is done correctly. Sure, I am the one who crafts the recipe for the beer, but without a heathy and proper fermentation, the beer will be undrinkable. Being able to understand the fermentation pathways and how biochemical pathways produce off flavors allows me to troubleshoot issues much more efficiently. I am comfortable around a microscope and other scientific instruments. All the ingredients we use are spec’d for all sorts of parameters like protein content, enzyme content, alpha acids, esters and phenols. Having my degree allows me to quickly analyze and understand what I’m working with.

Is brewing beer an art or a science?

It is both! What I like to say is the art of making beer is making a killer recipe and flavor profile that a consumer will enjoy. The science of making beer is using your knowledge to achieve that goal and also being able to make the same consistent product batch over batch while your ingredients are changing.

“…the art of making beer is making a killer recipe and flavor profile that a consumer will enjoy.”

What role does fermentation play in the brewing process?

From a scientific standpoint, what is the difference between ‘good’ and ‘bad’ beer?

Most of the flavor flaws are directly caused by particular organic molecules that get produced through metabolic pathways during fermentation. Acetaldehyde and diacetyl, for example, are produced by yeast under stressed conditions. Some particular minerals weren’t in high enough concentrations, a low amount of viable cells were added or not properly monitoring fermentation temperatures can all lead to off flavors. 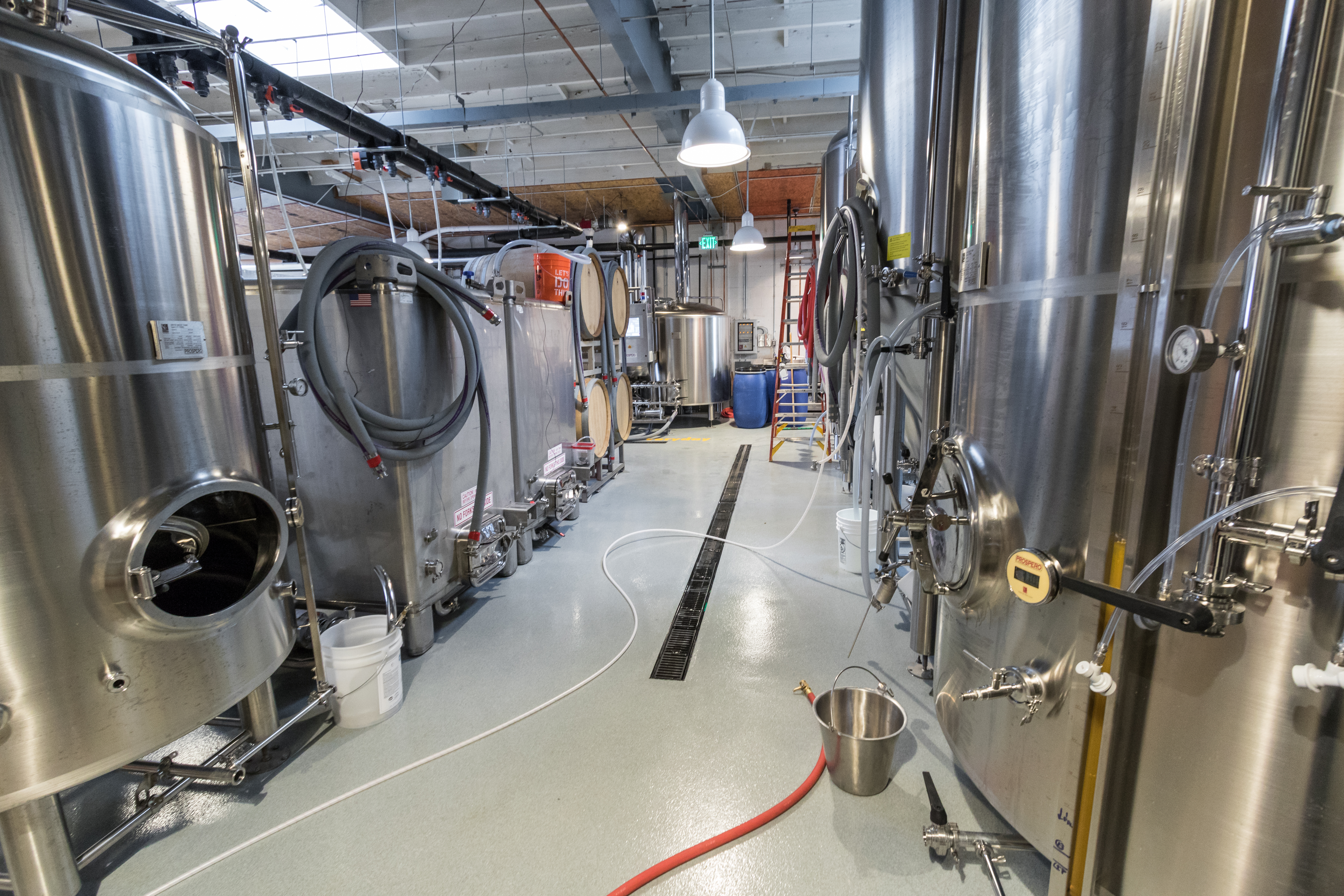 Beer is bitter by “alpha acid” compounds found in hops. When the beer is boiled, you are actually conducting a reflux. The precursor molecules found in the hops isomerize during the boiling process and cause it to become bitter.

What is the ‘correct’ way to pour a beer? What goes on at a chemical level?

I am not a stickler when it comes to how a beer is poured. I mostly prefer it to be cold, carbonated and poured in a clean glass. I do like to see a bit of head on the poured beer and I want the foam to remain on top of the beer while I drink it. On a chemical level, beer protein foam stability is a huge subject of scientific research. Scientists know mostly what proteins are involved but exactly how they interact is a still a mystery. Also, foam and foam proteins interaction only form once. So the more foam you generate, during production, packaging and serving, the less amount will actually stay on top of the beer.

What are two fun science facts about beer that not many people know?

1.Enzymes were discovered by a scientist who was researching beer. The scientist lysed a yeast cell and discovered that there was something inside the yeast that continued to ferment the beer. He called these “things” En-Zymes which translates to In-Yeast from Latin. 2. Louis Pasteur was the scientist who discovered that yeast was the organism responsible for fermenting beer. Before Pasteur, it was scientific dogma that the sugar in beer spontaneously decomposed to alcohol and CO2. It almost ruined his career trying to convince the scientific community and this fact was overshadowed by his other contributions to science and food stability.

What are some common inaccurate myths about beer?

The color of the beer indicates strength and that low alcohol beer has less flavor. Consumers often assume that Guinness is heavier and has more calories but Guinness is around 3.5% ABV which is lower in ABV than Bud and it has less calories. This example disproves both myths.

What is one of the biggest lessons you learned as you left your research position and launched a brewing company?

The biggest lesson was being able to balance what I wanted to brew or what I personally find interesting with what will sell or what the customer wants. I always want to brew interesting styles or with odd ingredients and sometimes the beer just doesn’t sell. Which can be disappointing, but I try to sneak in some more interesting styles like Lagers, sours and dark beers in my onsite taproom to help educate consumers and introduce them to different styles of beer.

“I like making people happy and I like to put a smile on someone’s face because they enjoyed a beer I made.”

What is the most rewarding part of what you do?

The most rewarding part of my job is interacting with customers. I like making people happy and I like to put a smile on someone’s face because they enjoyed a beer I made.

Any advice for someone wanting to start brewing their own beer?

Do your homework! Develop a business plan and be able to roll with the punches. Also always remember that you are not in the business of making beer, you are in the business of SELLING beer. There is a big difference and selling beer isn’t for everyone.

I typically enjoy most hoppy styles of beer, like an IPA or hoppy lager. I like beer that is drinkable, I want to be able to drink a whole pint without it feeling like a chore.

As much as yeast is essential to brewing and fermentation, it also plays a key role in Zymo Research’s history. In fact, three budding yeast cells still adorn the company’s logo as a constant reminder of our story. Learn about how Zymo Research began and the roots it has evolved from.