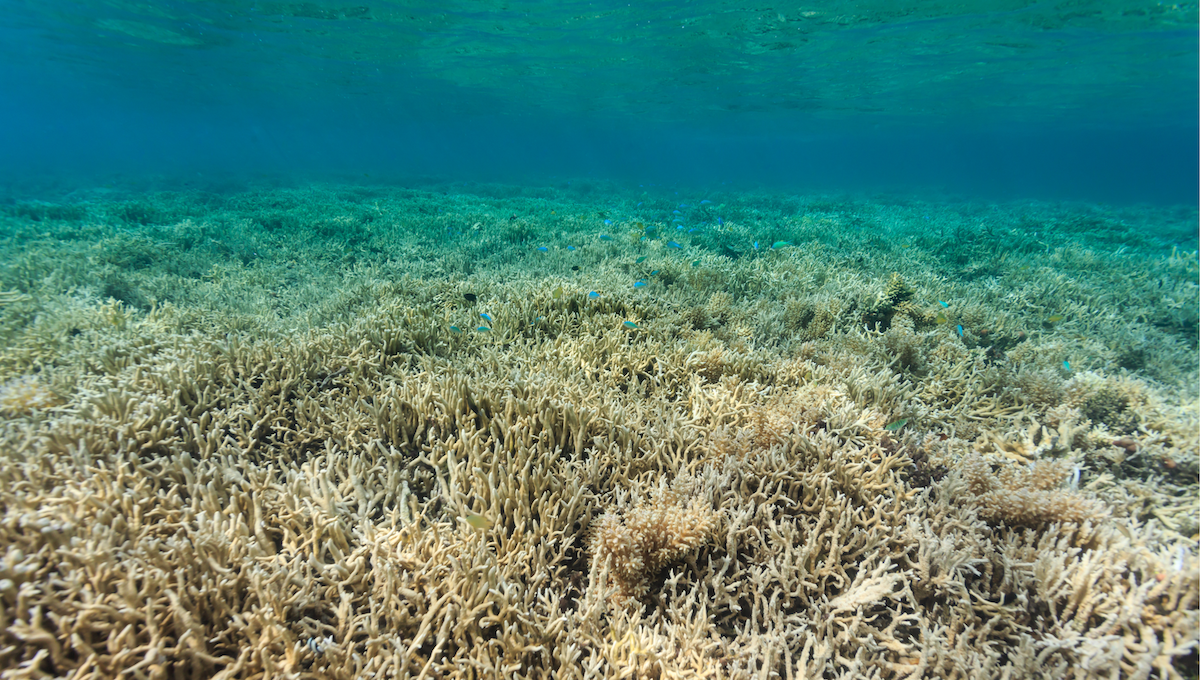 In 2016, a silent death wrapped around the Great Barrier Reef off the coast of Australia and drained the color and life from more than half its coral. The event was unprecedented and left researchers around the world with new questions, one more troubling than others. Could these beautiful underwater ecosystems be messengers for something bigger?

Recent effects of climate change have led to a dangerous rise in seawater temperatures which has devastated coral reefs across the globe. Ocean temperatures and pollution can cause stress to the coral which results in the loss of the colorful algae that lives within their tissues in a process called “bleaching.”

Losing the algae results in a loss of the major source of food and energy for the coral and leaves it susceptible to diseases and death. While only occupying 1% of the entire ocean, coral reefs have one of the highest biodiversity in the world and provide habitats for up to 25% of all marine life [1]. Therefore, the impact of environmental changes on coral can be used as a proxy for measuring the health of the ocean.

Genetic diversity and high variability in DNA are critical factors for a species’ capacity for adaption, extinction risk, and resistance to environmental stress. A genomic study performed by the Hawaii Reef Connectivity Consortium found that areas exposed more frequently to bleaching effects have decreasing levels of genetic diversity in coral as well as the many inhabitants of the reefs [2]. Current conservation strategies are focused on protecting the genetic diversity of coral and therefore reducing their extinction risk caused by growing climate change.

Taking this further, some researchers use DNA to RNA ratio studies as a biochemical growth-rate indicator for studies of fish and marine invertebrates (including coral) [3]. The ratio is useful because DNA is a fixed amount per cell whereas RNA can vary depending on metabolic need. Therefore, the RNA/DNA ratio may provide a better understanding of the coral populations’ response to environmental stress caused by climate change because of the strain on protein production.

While the information provided by this RNA/DNA ratio is critical to understanding the risks posed by environmental stress, purifying DNA and RNA from coral sample can be tricky. Coral tissues contain strong collagen fibers, which can make cells lysis difficult. However, high-quality DNA and RNA can still be isolated and purified from coral tissue with special considerations. For example, it is suggested to remove as much skeleton as possible from the coral tissue in order to minimize the possible effects of endolithic organisms.

Below are a few recommended protocols for how to extract DNA and RNA from coral:

The growing threat bleaching poses to the genetic resilience of reef ecosystems makes the analysis of coral DNA and RNA critical for both conservation efforts and predictions of future environmental stressors. With this information, conservation scientists can determine which species are most threatened by climate change, coral bleaching and associated environmental stressors and can find proactive solutions to mitigate this risk.

Learn more about the methods used in this blog: